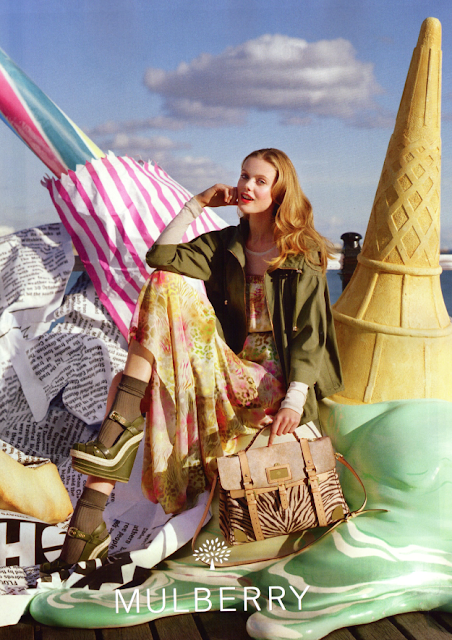 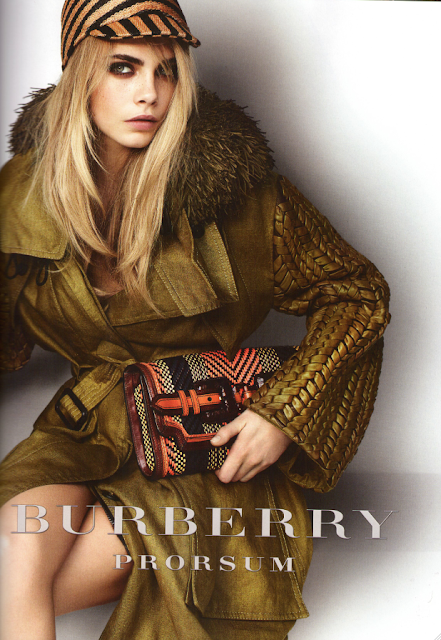 I really like everything about Christopher Bailey's design leadership at Burberry and Mulberry's brilliant rise in fashion status however British high end luxury brands such as Burberry can afford to bring back 'some' or maybe all of their manufacturing into the UK.
'Made in the UK' carries huge cache for Far Eastern, South American and Asian customers. There is a Burberry trench coat factory in Castleford West Yorkshire apparently that  has recently doubled is it's productivity due to demand but this is a drop in the ocean on overall Burberry garment output volume wise.  The UK needs to rebuild it's manufacturing base again if it is to pull itself out of the down turn long term.
Quality is not always guaranteed by shifting to Chinese factories. Burberry has taken a quality hit because of this in my opinion. A huge mistake was made closing down the Welsh factory. Mulberry has a factory in Bath but there has been some controversy over the fact that Turkey ( the home of the counterfeit brand in the 1990s ) has been used for some of the collection in the past. Mulberry is way ahead of many other British brands by having some of it's manufacturing here in the UK at least.
Agreed that these brands are having to compete with fashion giants such as the LVMH and PPR group however their Britishness is being diluted by their manufacturing choices.
Also customers paying top dollar expect quality and with that there should be good after care service. Good design should last more than one season.
The throw away mentality of pre recession times will become a thing of the past. Barbour still offers a repair service. Attitudes need to change to reflect the times we are now living in.
Our British heritage is the last of the family silver we have left to capitalise on frankly and we are in a perfect position now with the luxury goods market high margins to make the most of it. A Burberry trench coat costs £2,395.00, and this is perceived as a good price by far Eastern and South American visitors to our Island.
The British Luxury goods market is defying the down turn and is expected to grow by 57% in the next 5 years making it worth 9.4 billion by 2015.


Saving Skills
British heritage Luxury goods companies in particular Burberry are making huge profits - some of this money could be channelled into investing in skill development  and apprenticeships encouraging manufacturing and production back in the UK for the long term. Mulberry and Burberry are in a unique position to be able to lead by example.


Check out the 'Out of Exile' brand where all the production is done in Kent.  http://www.outofxile.co.uk/OOX_Autumn_2011/About_Out_of_Xile.html


Who is to blame historically : In part accountants who look at the bottom line and put pressure on businesses to go for higher short term profits.
Brand integrity is key for business success. Customers are no longer interested in the superficial - when they buy into a brand they are buying other elements that make up the DNA of their aspirations and that in todays world is seeing that the short termism of greed and profligacy is eradicated. People will increasingly seek to make statements with their purchase choices.

John Lewis has shown an astute understanding of this trend as evidenced by it's buoyant Christmas profits. It is a company where the employees are all partners and have a share in the profits when times are good. The CEO is paid well but nothing astronomically more than the shop floor sales person and no where near that of other retail sector CEOs. John Lewis has no problem attracting the very best candidates for top jobs.
The brilliant advertising campaign sums up the new mood - it struck a chord over Christmas.
Greed and self service is not derigueur - doing the right thing is. Those who do will win.