Ralph Lauren to be honoured by The British Fashion Council 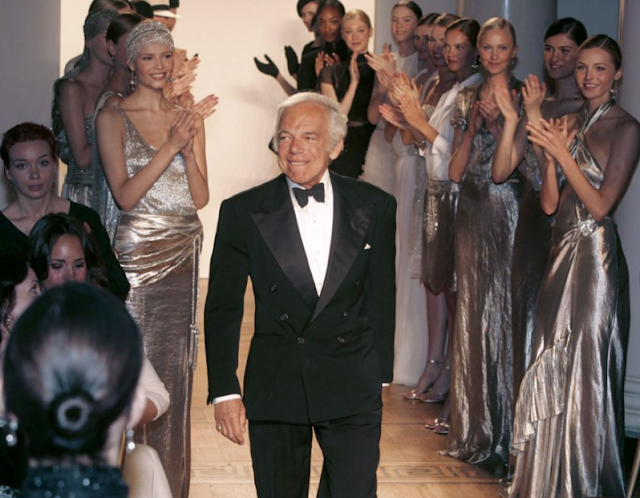 The British Fashion Council today announces that Ralph Lauren will receive the Outstanding Achievement Award in Fashion at The Fashion Awards 2016 in partnership with Swarovski. The designer will be honoured for his invaluable contribution to the fashion industry on Monday 5th December at the Royal Albert Hall in London.

Over the past 50 years, Ralph Lauren and his iconic brand have helped shape and define the American fashion identity in a unique and resonant way. Through his tireless commitment to design, innovation, business and philanthropy, Ralph Lauren has established himself as a pillar of the global fashion community.

Ralph Lauren introduced his tie and menswear business in 1967, and only five years later was presenting a full line of Polo by Ralph Lauren menswear at New York Fashion Week in 1972, the same year he launched a womenswear line. The Ralph Lauren family of brands has since shaped the contemporary image of quintessential Americana, encompassing Lauren’s realisation of an aspirational lifestyle with glamour, sophistication and integrity. With campaigns shot by long-term collaborators like Bruce Weber, Shelia Metzner, Mark Seliger and Stephen Meisel, the Ralph Lauren brand has cemented a visual heritage that is instantly recognisable and rightly celebrated.

Ralph Lauren has been responsible for countless cultural moments that have shaped the fashion world, from iconic and cinematic advertising imagery, early adoption and integration of technology, and a long-lasting romance with Hollywood’s story-telling and glamour, from `Annie Hall’s’ endlessly imitated casual sophistication to the fairy-tale gown Gwyneth Paltrow wore to collect her Oscar.

As well as his creative brilliance and skill as a businessman, Lauren is a wonderfully generous philanthropist. Since co-founding the Nina Hyde Centre for Breast Cancer Research in 1989, Lauren has continued to support a multitude of worthy causes through the Polo Ralph Lauren Foundation. In 2000, the Ralph Lauren Corporation launched the Pink Pony Fund, later founding the Ralph Lauren Centre for Cancer Care in Harlem, New York, and The Ralph Lauren Centre for Breast Cancer Research at The Royal Marsden in London. Lauren established the American Heroes Fund to help with the relief effort following the Sept. 11, 2001, terrorist attacks, and he donated $13million towards preserving the original Star-Spangled Banner. This endless capacity for generosity is part of what makes Lauren such a beloved and respected figure in the fashion community, and is one of countless reasons he is to be honoured this year at the Fashion Awards.
Dame Natalie Massenet, Chairman British Fashion Council commented: “Ralph Lauren is an exemplary designer and businessman. He has helped to define an era in both American and global fashion with his singular vision; I know that most of us would say he has inspired us immeasurably. He has built an outstanding legacy and I look forward to celebrating him for years to come.”

The generosity and commitment of our sponsors is more vital than ever. Please help us by acknowledging our Principal Sponsor SWAROVSKI for their support of The Fashion Awards 2016. Official Presenting Sponsors of the event are American Express, M•A•C and TONI&GUY. Official Sponsors are Cîroc, Marks & Spencer and Mercedes-Benz. 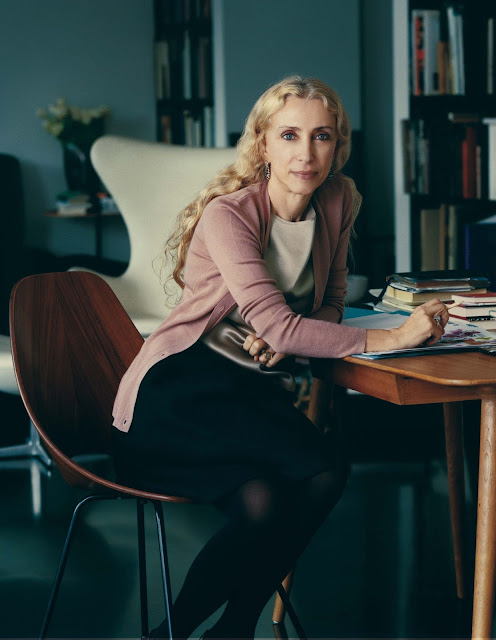 As part of our new global format The Fashion Awards 2016 in partnership with Swarovski will be introducing The Swarovski Award for Positive Change. The award recognises individuals who promote the welfare of others by the generous donation of their resources in order to achieve change and positive impact to good causes.

On Monday, 5th December at the iconic Royal Albert Hall in London, Franca Sozzani, Editor-in-Chief of Vogue Italia and L’Uomo Vogue, is to be honoured for her commitment to diversity and for utilising her position and influence to positively impact the wider world. Her tireless commitment to fundraising for local and international charities has benefited a great number of worthy causes. She will be recognised at the ceremony in part for her commitment to her role as Global Ambassador Against Hunger for the United Nations World Food Programme, her work with Convivio in the fight to eradicate AIDS and the work she does with the European Institute of Oncology towards prevention and diagnosis of oncological diseases.

Throughout her career Sozzani has given consistent prominence to important social issues in Vogue Italia and L’Uomo Vogue. She has played an integral part in the Who Is On Next?, the initiative that identifies and promotes emerging talent around the world, from Europe to Africa and from Asia to the Middle East. She has also overseen the creation of the dedicated Vogue Talents section of the Vogue Italia website.

Nadja Swarovski, Member of the Swarovski Executive Board commented: “We are delighted to present the inaugural Swarovski Award for Positive Change to Franca Sozzani. During her nearly three decades as editor of Vogue Italia she has worked tirelessly both to innovate and push the creative boundaries of fashion, and to help lead the global fight for a world without AIDS, cancer and hunger. Franca is an incredible woman and a force for good, and this award is the perfect celebration of her commitment to positive change, both inside and outside the industry.”

Dame Natalie Massenet, British Fashion Council Chairman commented: “Words cannot express the huge deal of admiration and respect I have for Franca and her work. She exemplifies those qualities this award has been created to honour, and her tireless commitment to the causes she cares so passionately about is a great example to us all. The positive impact she has had on the fashion and global communities will be felt for generations to come.”
The Fashion Awards 2016 will celebrate the best talent from the global fashion community and will be the inaugural annual fundraiser gala for the British Fashion Council Education Foundation charity. The Education Foundation offers scholarships to talented young people to study BAs and MAs and offers funding for apprenticeships to develop much needed industry skills. The British Fashion Council aims to raise £10million over the next ten years for the charity. Donations to the Education Foundation can be made online via fashionawards.com/About/BFC-Education-Foundation.

The generosity and commitment of our sponsors is more vital than ever. Please help us by acknowledging our Principal Sponsor SWAROVSKI for their support of The Fashion Awards 2016. Official Presenting Sponsors of the event are American Express, M•A•C and TONI&GUY. Official Sponsors are Cîroc, Marks & Spencer, Mercedes-Benz and SHOWstudio. 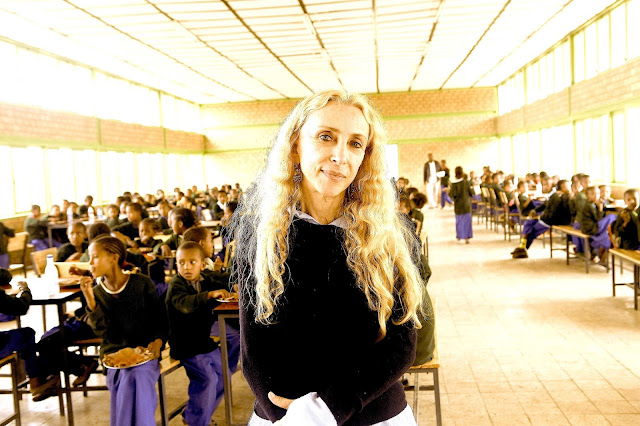 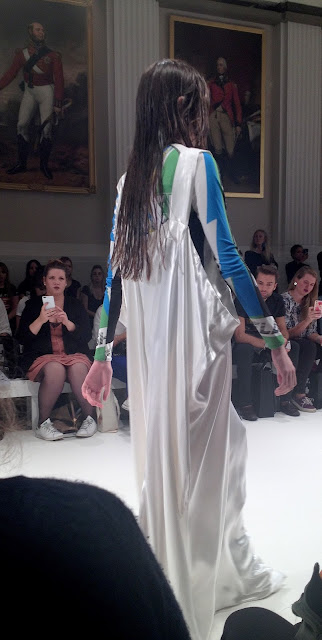 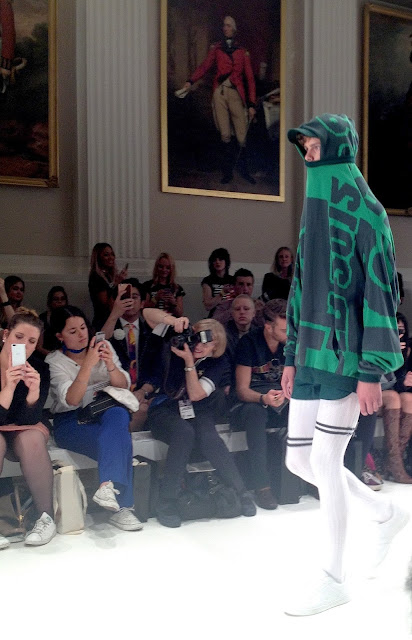 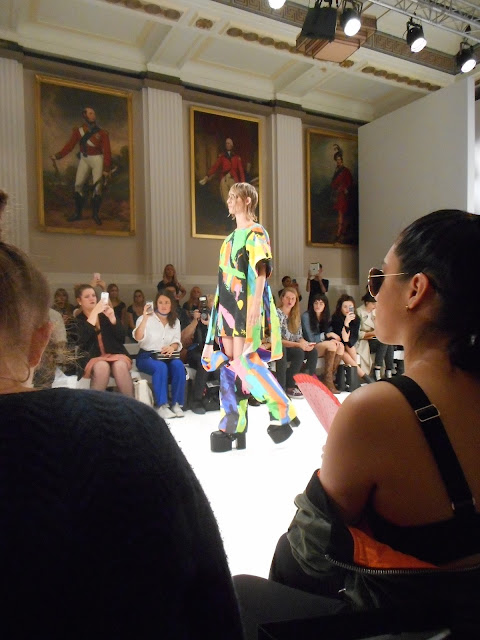 The Swedish School of Textiles

An exhilarating combination of diversity from each graduate’s view of their fashion careers. 15 shows, 7 outfits and each designer given a chance to show off their identity in fashion within each piece. Highlighted shows that particularly caught my eye, started with the work from Matlida Forssblad and her ‘Future Fashion Epic Beauty’ collection. The start of her collection began with a model weaving through a fabric white background, which then amazingly turned into a dress, to which the model proceeded to walk down the catwalk fully attired! Matilda’s use of the natural fall of the fabric, gave a new perspective on what clothing can do without over-complicating the design. Her interesting style of connecting the fabric to a models hairstyle or having a model hold the front of the dress in her mouth is extraordinary!

Julia Ragnarsson’s show ‘Who are u wearing?’ gave an added dimension to the ideology of which designer a celebrity is wearing, when on the red carpet, whereas in this collection the celebrity is printed on the clothing. When the collection walked down the catwalk, the clothing is almost an optical illusion, as the prints blend in with the model and begs the questions where the fabric stops and the model begins. The majority of Ragnarsson’s outfits were all loose fitting, and the main feature was the customised print on each piece. A particular piece that was obvious of which celebrity was being portrayed was a print of Angelina Jolie styling a high leg slit in a black dress with red lipstick. 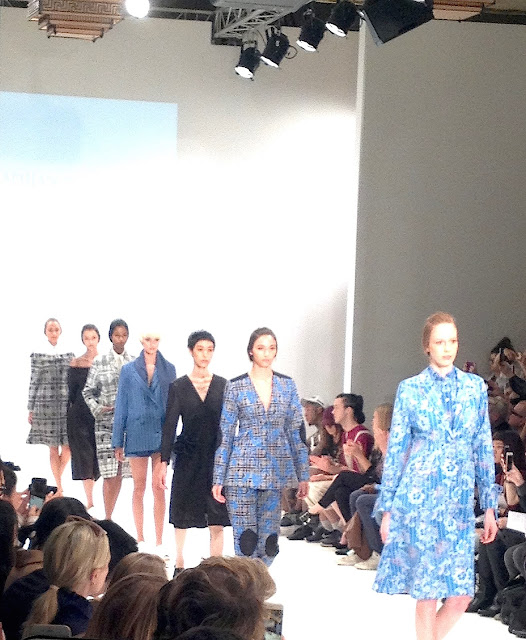 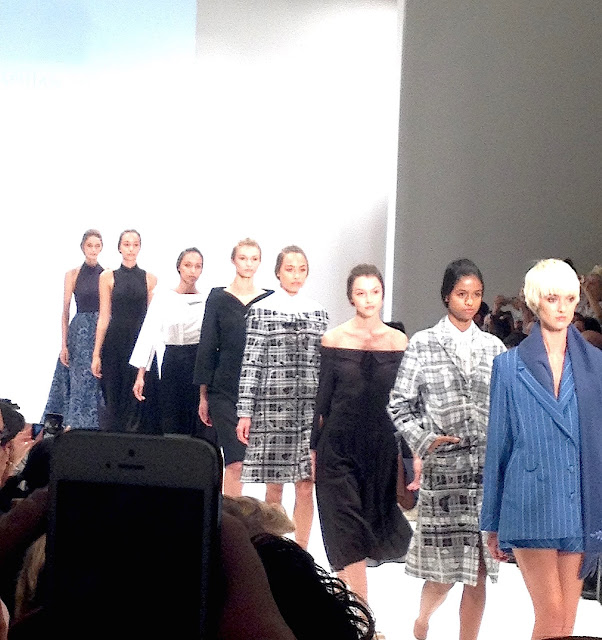 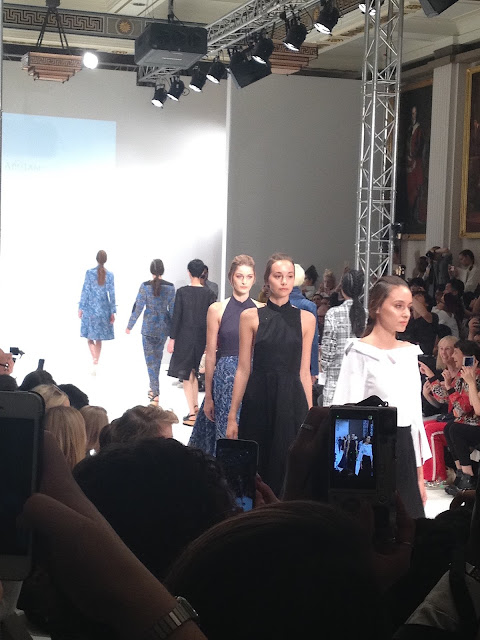 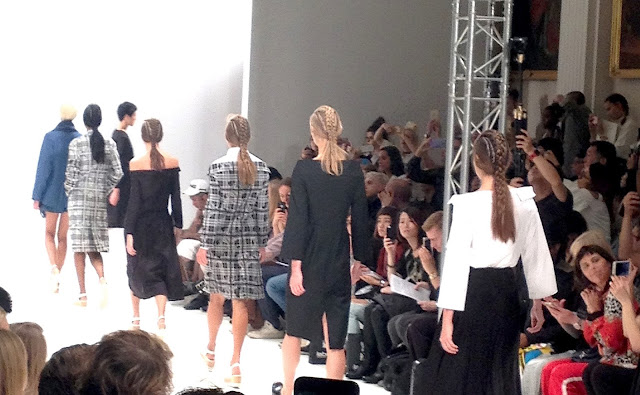 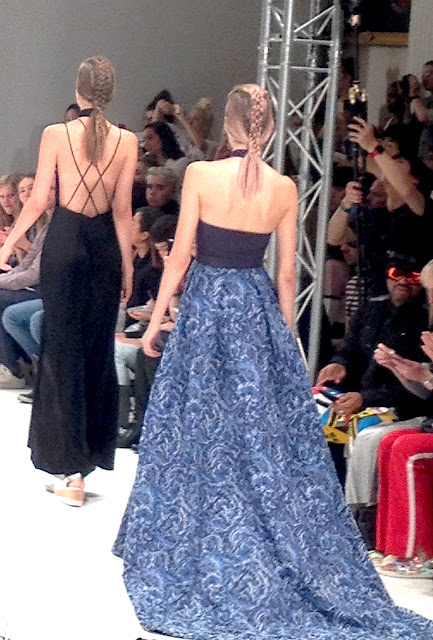 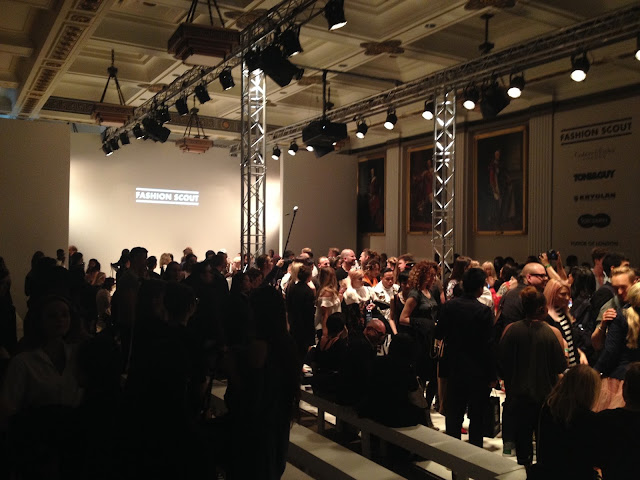 Inspired by ‘An Ancient Summer Nights Dream’ APUJAN’s Spring/Summer 17 collection, showed a beautiful colour palette of blues, grey and black, with the use of plaid and stripes. The collection lends itself to be worn on an every day basis for the duration of summer. A signature piece of APUJAN’s designs was a halter-neck dress with a long flowing patterned skirt, with a hidden front-slit, which gave a dreamy effect due to its movement and use of colouring. APUJAN’s collection is influenced by literature. In this particular collection, the focus is on a dream like state, the use of various knitted techniques and knitted fabric, which wouldn't be expected for summer climate, has been redesigned in a open weave to allow the fabric to breathe, another technique used was small layering, which combined into a bold and casual look for the catwalk. Whilst APUJAN’s collection walked down the catwalk, live music from singer Slow Shudder and DJ Questionmark, added to the surrealness of the designs, and encouraged the story of fantasy, love and dreaming. 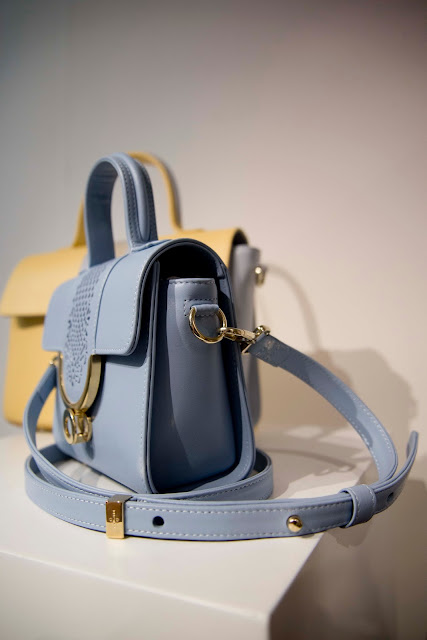 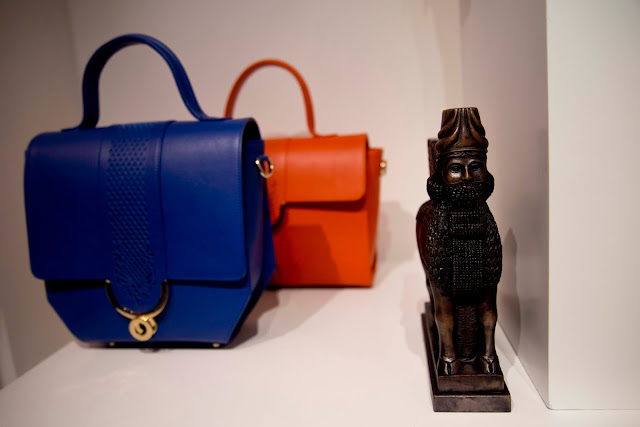 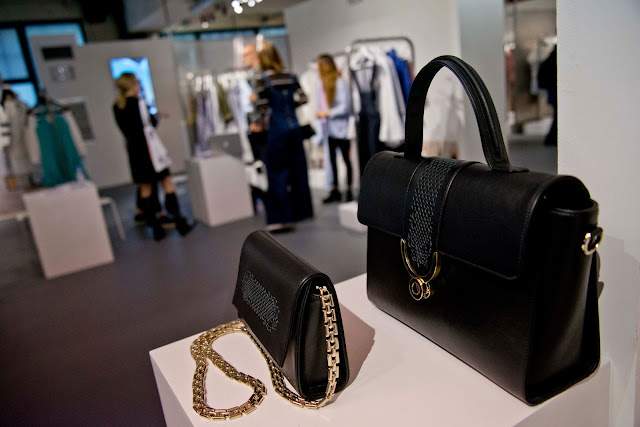 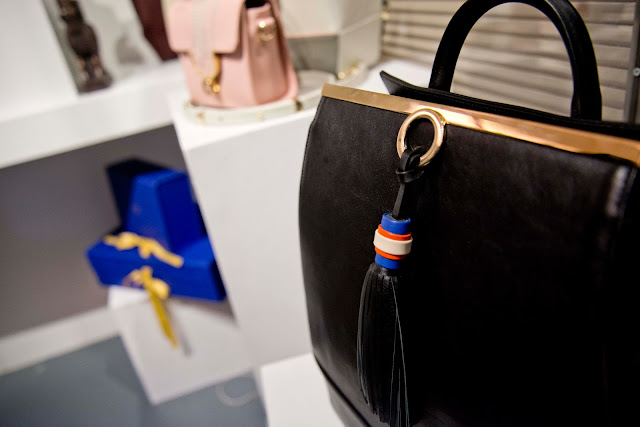 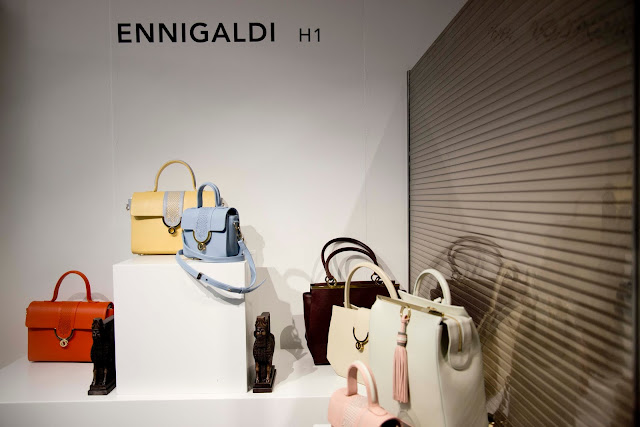 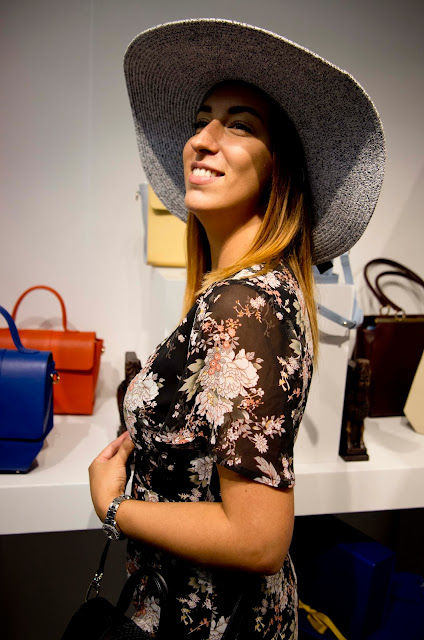 On day three LFW, Ennigaldi showcased their spring/ summer 2017 collection at Brewer Street Car Park, a bustling hub for the weeks events. The work displayed across the showrooms covering the first floor of the space proved to be really fantastic and demonstrated a diverse coverage of talented designers.

Fashion week is relatively new to Ennigaldi, as the luxury accessories brand launched their debut collection for Autumn/ Winter 2016. The sophistication of the brand is echoed throughout each of their designs. Their work is based on the element of craft and draws inspiration from historical figures with a modern twist. The concept of the brand really drew me to their designs, as they named it after the iconic Babylonian princess, ‘Ennigaldi’. The work combines a strong indication to art, structure, architecture and colour, and the subtle reference to history creates the innovative brand. As a result of this, the two collections showcased really does take any of us on a journey through time and educates each of us on cultural style. I really think that this is an identity that will separate the artistic brand away from many others.