Edie Campbell in Anya Hindmarch shoot - all in the detail... 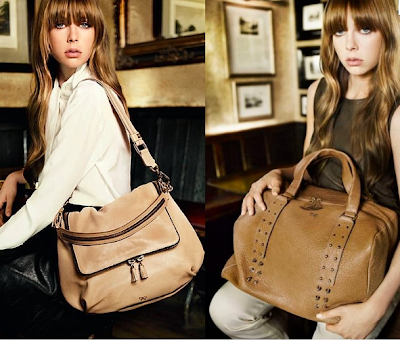 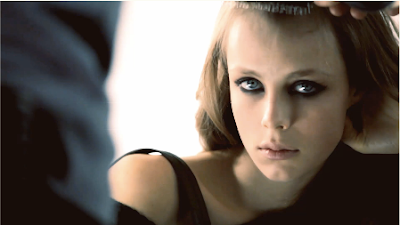 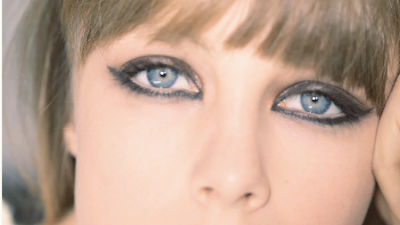 I like Mulberry but not as much as I admire Anya Hindmarch hand bags......
Edie Campbell looks great in this film, and the brand shoot is perfect for the DNA of the AH woman. The Anya Hindmarch shop is in Pont Street London and well worth a look. A friend of mine was given one of the bespoke handbags as a thank you from one of her grateful property clients. The service allows a personal message to be placed in gold leaf inside the bag as well as the owners name. I was impressed.
In the current tough retail competitive market, having a quality service offer that is different to other competitors is a good business decision. In the high end luxury market customer service is key to raising sales and loyalty.This is clearly proving a successful formula for Anya Hindmarch whose profits have seen a very healthy and steady increase and a resulting rise in market share internationally. 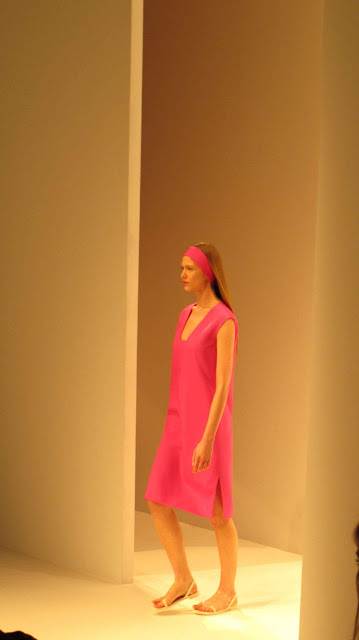 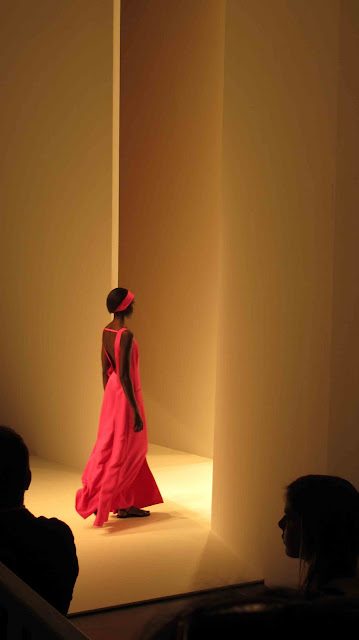 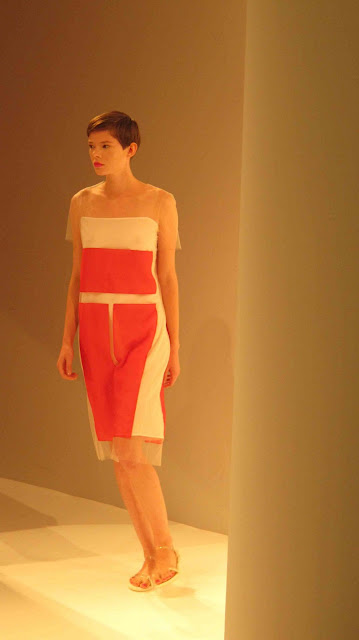 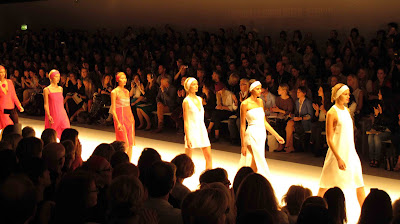 I absolutely loved the SS 2012 Jasper Conran Collection seen at London Fashion Week at Somerset House. The Jasper Conran woman is self assured, in control, calm and elegant. Conran's understated, less is more hand writing is perfect and reflects for me the mood of the moment. The bright fuscia pink and sparkling pure white colour palette presented in chiffon, linen, and crisp cottons on a selection of simple linear silhouettes without a hint of bling is so refreshing and cleansing of spirit....I may go and feng shui my wardrobe come next Summer!
Words Schelay please credit
photography Margarita Gozalvez - pls credit
Posted by Fashiontent at 14:50 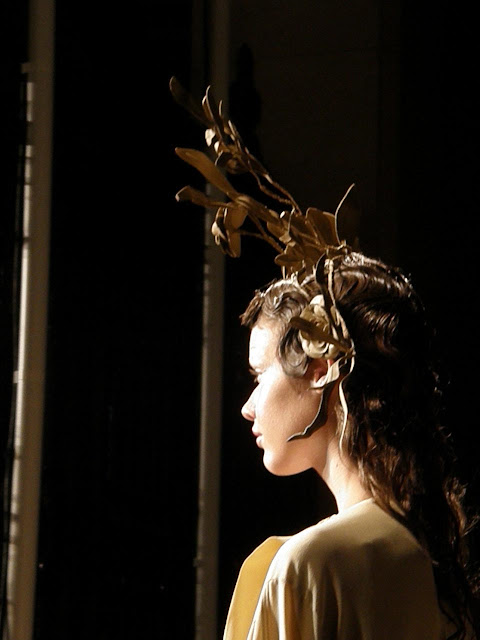 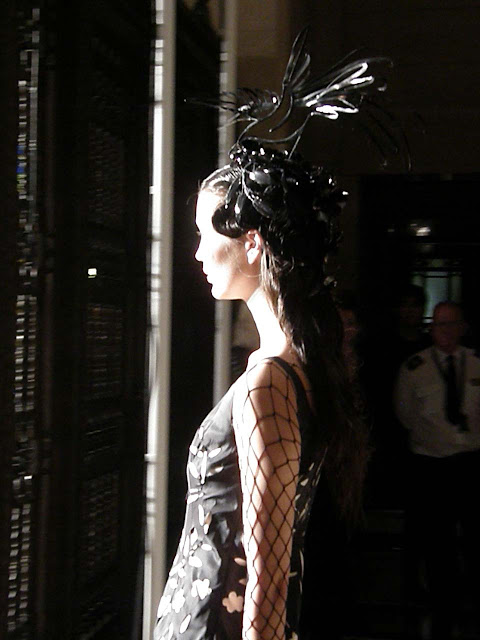 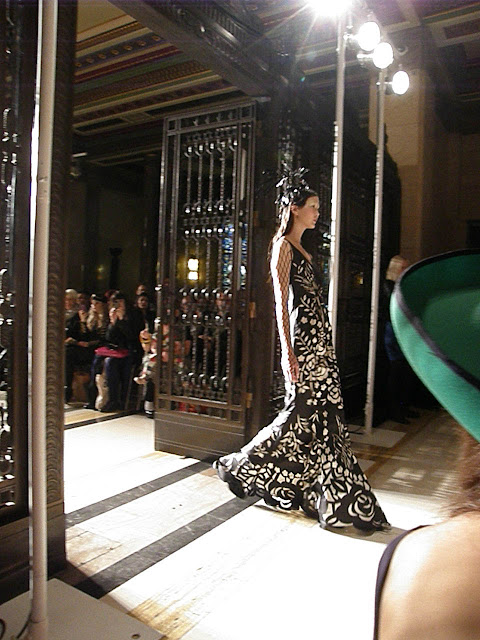 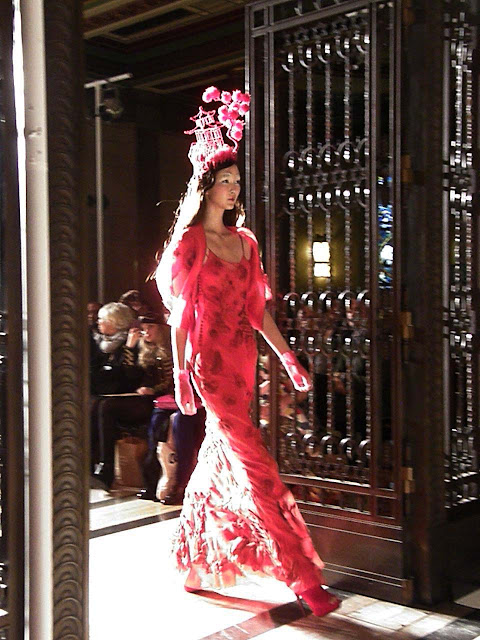 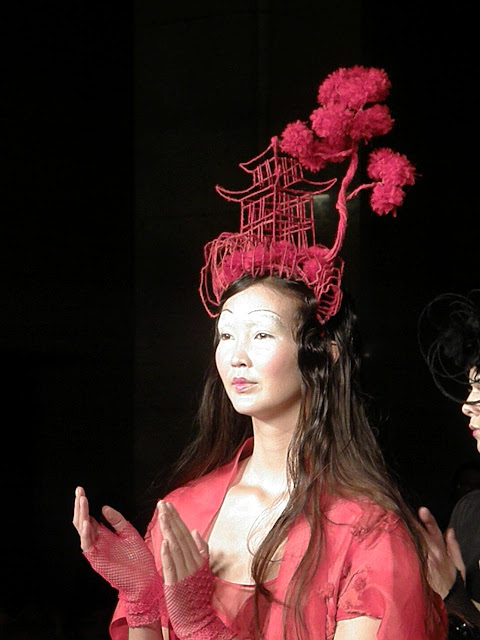 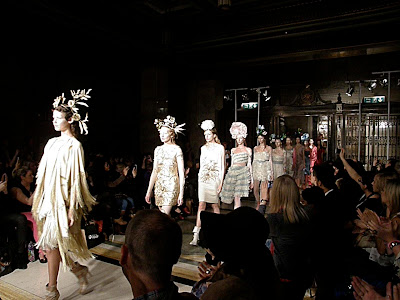 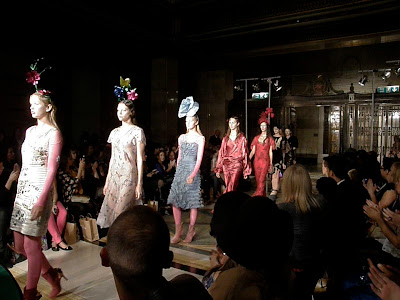 Nothing had prepared me for the splendour of Spanish born Elisa Palomino's show in the grand show room in Freemasons' Hall, Queen Street, Covent Garden where many emerging  labels premier their new season's collections in London.

It felt like we had all been transported to the Hidden City in Beijing  or a grand Italian Villa in Tuscany or Rome. This collection had something of the fairy tale about it. I absolutely loved it. It was as if Palomino had discovered an aristocratic dressing up box tucked away in some forgotten room ( she took her inspiration from the Madrid Garment Museum ) -  her exquisite surface decoration and embellishment recreates the glory of the past wardrobe extravagancies of the aristocracies of Europe.  This love of Oriental decoration
became fashionable across the old empires of Europe, influencing artists, architects and interior design.  Our own King George IV was a huge fan and built the Royal Pavillion in 1830 in Brighton in homage to his own fascination with Far Eastern/ Asian culture and aesthetic.
Palomino's work is not couture, cleverly commercial with a small c, her clothes are infinitely wearable and would work well for various occasions, cocktail parties, smart evening events, Weddings, Balls. The buoyant Chinese and South American markets will love the cultured glamour her collection provides as will the other more tightened Western economies. Investment fashion buying is something that is still doing well.
If any designer was not more worthy of the Sponsorship of Vauxhall Talent Scout it is  Palomino. It comes as no surprise to me that she is an ex MA St Martins fashion student. Nor does it come as any surprise having seen this show that she was head of studio at John Galliano for 8 years. More recently she was vice president of Diane Von Furstenberg.
Last year she show cased her first 'own collection' at New York Fashion Week where the entire lot was bought by Dolce and Gabbana for the Spiga 2 concept store in Milan,
( see my post about Via della Spiga)
It was a privilege to be at this show - Palomino is a name to remember. What is more exciting is the fact that she has chosen London in which to have her creative studio.
www.elisapalomino.com
Words and photography Schelay McCarter - please credit.


For the Brazilian (Portuguese) version please look at the website of the fashion and culture B magazine
http://www.revistab.com.br/
Posted by Fashiontent at 09:20 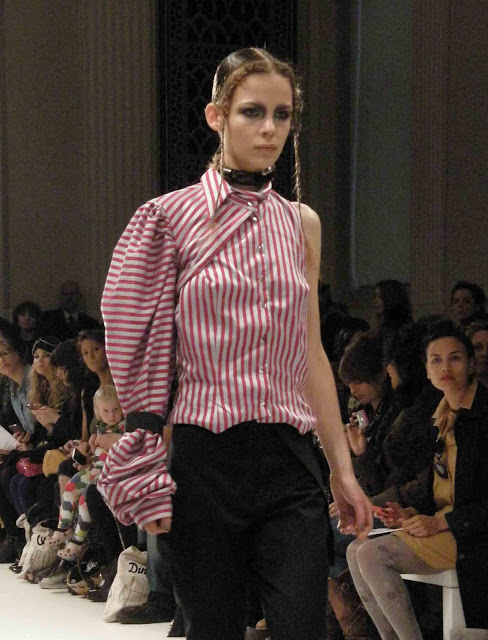 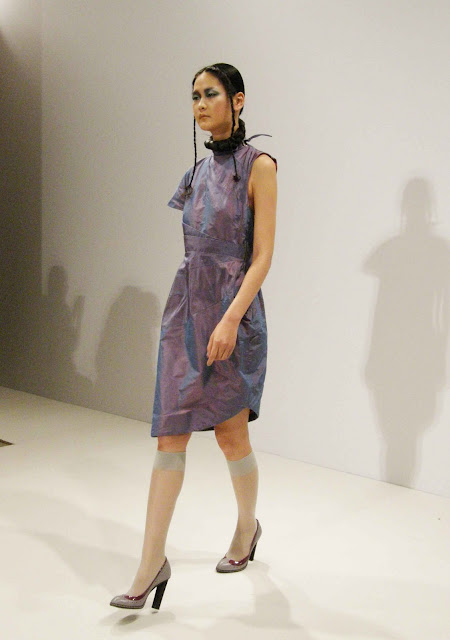 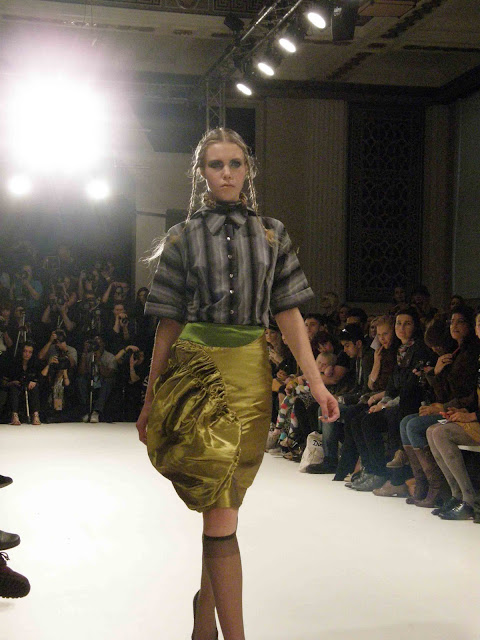 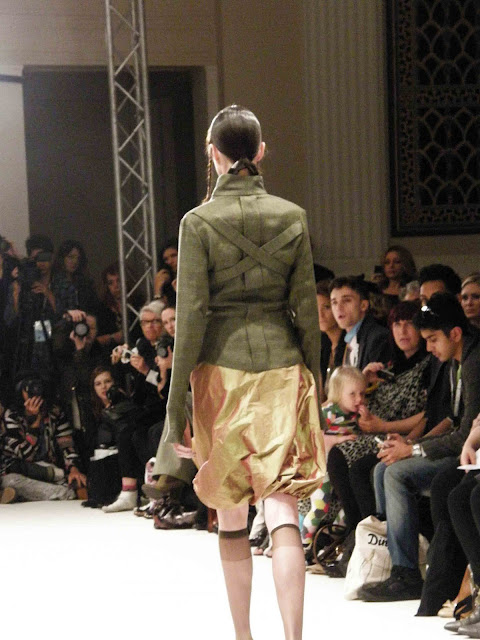 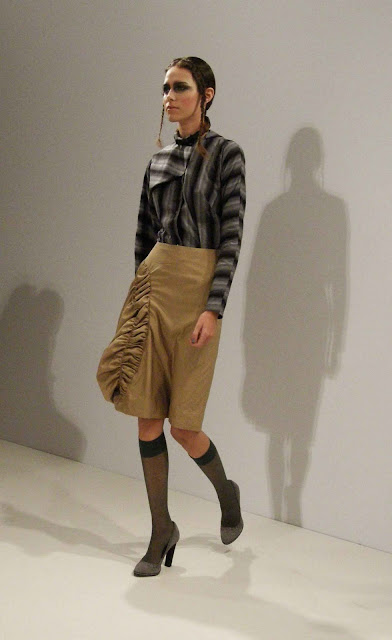 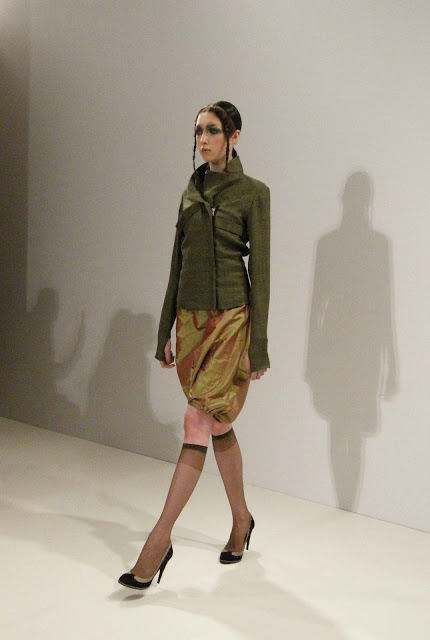 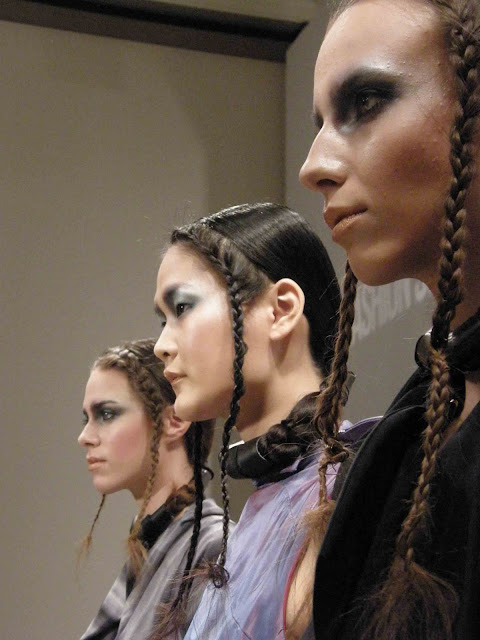 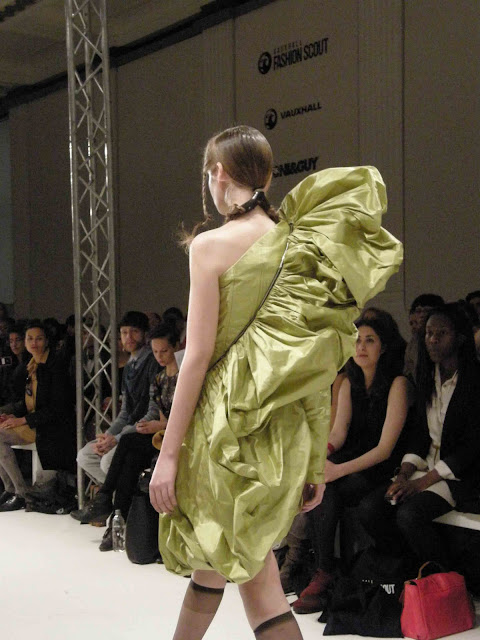 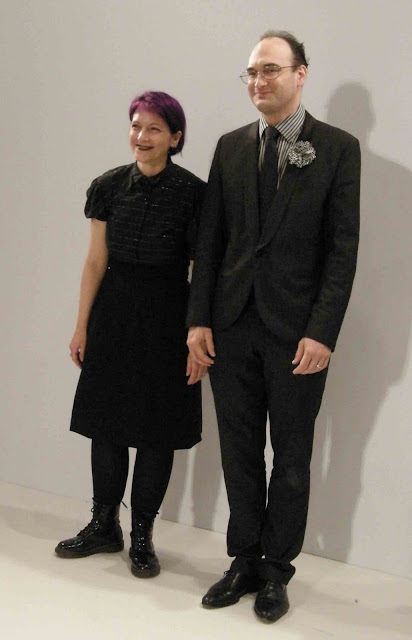 It was Tuesday morning, yesterday in fact that I rushed over to the grand Freemasons' Hall on Queen Street London for the first show of the day 'A La Disposition' Mechanical Failure at 10am organised by BLOW PR front of house and Vauxhall Fashion Scout. I love this venue, the deco interior is a most fitting environment to show case fashion talent in London. The show was 10mins late, this was fine as I sat in the front row next to Keskula an interesting fashion scout who connects people creatively in the Nordic states .


I was not sure what to expect from this talented design duo. Apparently the Spring Summer 2012 collection by A La Disposition forms 'an expression of defiance in an age of retraction'. The expertly crafted garments were constructivist in essence, the body form a vehicle to express nonconformist versions of classic shapes, for example the skirts and dresses were made up in the most deliciously sumptuous raw lime silks, these ballooned voluminously on one side and in contrast hugged the figure smoothly on the other, whilst other versions were symmetrical and fluted. The contrast between exercised control and the elegance of volume is central in the collections created by A La Disposition apparently.


My favourite piece was the wool jacket with the cris cross detailing on the back.
I can see Kiera Knightly looking perfect in the purple ballooning skirt and black blouse. The knee length pop socks worked and it was pleasing to see less vertiginous shoes too.
A La Disposition is relocating and will be settling permanently in London.

The KNITWEAR was fantastical and wild !     An explosion of colours: intense textures,  yet soft , meshed and merged.
Mosaic and patchwork of knitting fabric, cable ties,  yarn ….
Look at the shoes and the mosaic’d faces
Jenny  is inspired by 1930s painter and textile designer Sonia Delauney ( not to confuse with Robert )
Resonant palette and tones.


This brilliant collection is being featured in world famous fashion savvy 'Browns' boutique's window in South Molten Street in London at the moment. Go and take a look and make an investment buy!
http://www.brownsfashion.com/home/whatsnew.aspx