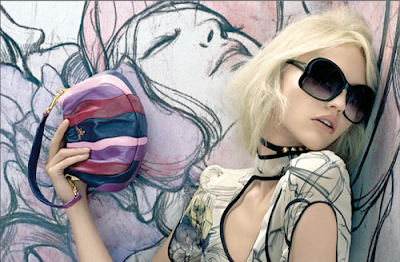 With new technology and the creative means to innovate and experiment using digital media on the internet we are seeing an explosion of creative ideas emerging in the design of web sites and how fashion is being advertised and promoted.

Fashion brands of any note are now using short promotional films to reinforce their brand identity on their web sites. These short films with music create a vibe that can take the image of that seasons collection to a new level of brand recognition and reinforcement.

In the same way that rock band use film to create a story or image around their song release, a fashion label is using film to tell a story in a virtual world, sell an image, communicate a message, and spin a lifestyle around the collection they have released for that season.

Fashion and music go hand in hand, before too long we will see rock bands such as Snow Patrol joining forces with big fashion brand labels and weaving their image in with the fashion image.

Prada has lead the industry with her remarkable commission of an animation called 'Trembled Blossom' to promote and enhance her extraordinary Spring /Summer collection in Feb 2008. The film worked in combination with the fashion brand shoot that was released to all the top fashion glossies such as Vogue internationally -

In the 1960s the Beatles as usual led the way with the creation of their Virtual world animation of Yellow Submarine. The British rock band Blur took inspiration from this and had huge success with their virtual band Gorillaz in 2002. Since then technology and the ease in which anyone can use it has been revolutionary.

Below we have another animation for Louis Vuitton, if you have been to see Alice in Wonderland or seen Yellow Submarine by the Beatles you will see some similarities - !