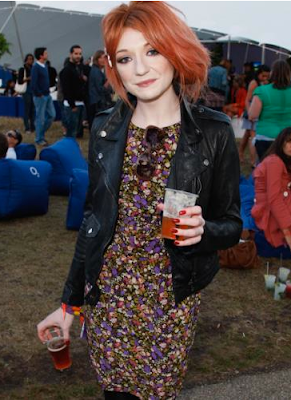 The back leather jacket has become a cool staple wardrobe item for this Summer. Burberry have an excellent one using the same styling features as an authentic bikers jackets designed for toughness and practical protection.  When one considers the variability of the British weather at the moment as well as the fact that Winter woolies come Autumn can substitute the pretty florals that have become deriguer to wear with it this Summer it is a good choice investment item too. The fact is they look good with everything! When will Vogue do an editorial shoot on the styling merits of the black leather jacket! with jeans, pencil skirts, rar rar skirts with jumpsuits, with a sequined dress ( that would look fab) and with Erdem florals - and so chic with the other Summer trend for bright colour block jeans! Where can I get some red ones ?
It was announced yesterday that the British maker of biker gear Belstaff sported by icons such as Lawrence of Arabia to Steve McQueen, will step up it's stake in the global luxury market after inviting Tommy Hilfiger as a consultant.
The appointment comes days after the business was bought by Labelux, the international luxury goods group which also bought Jimmy Choo last month. Hilfiger is an investor in Labelux, will serve on the board and is it reported likely to oversee the brands growth in the Far East.
Labelux is looking to tap a world market worth 150 billion last year. Belstaff whose jackets cost around £600.00 began life in Stoke on Trent in 1924 developing the waxed cotton clothing worn widely by bikers as opposed to the waxed Barbour jacket which is also popular in the hunting shooting and fishing set and is also now a fashion item of cache globally.
Posted by Fashiontent at 10:08